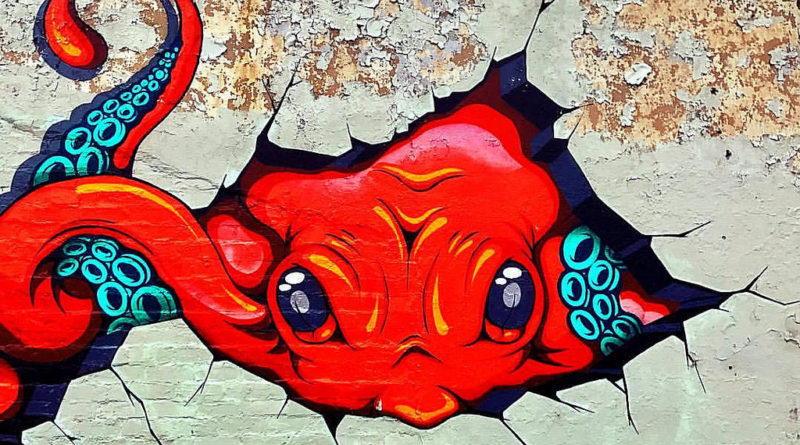 Yes, it’s time once again for our regular monthly “Dividend Income and Expenses” post.  In this post, I’ll lay out our January 2018 dividend income and expenses in excruciating detail for the world to see!

These kinds of monthly expense reports are very common on personal finance blogs, but I believe they are extremely instructive for readers.  There’s tons of financial lessons to be learned just by watching how other people spend their money.

January tends to be a extremely wet, stormy, and cold month in the Pacific Northwest.  The Tako family stayed indoors for much of January.  (In contrast to our summer months, where we get absolutely NO rain.)

The terrible weather doesn’t mean we don’t have fun of course — we socialize with friends by holding potluck dinner parties, and playing a few rounds of our favorite board games.

Until recently, our kids showed little interest in board games.  Now, they seem to be finally getting old enough to follow game rules, take turns, and enjoy board games themselves.  This is a HUGE development!

Expenses in January totaled $5,561.  This monthly number is extremely similar to January of last year — the difference was only 17 cents.  I’m not making that number up, I swear!

Overall, the similarity we’re seeing month-to-month is probably indicative of a “normal” baseline level of expenditures.

We’re planning a vacation in March, so this trend will break when the travel expenses finally hit our credit card.

Outside of mortgage and childcare costs, our “core” expenditures were $1,111. 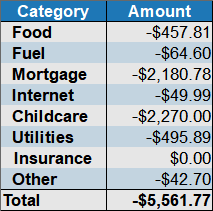 Food expenses in January were slightly lower than normal at $457.  This lower cost month was nice to have after a pretty expensive December.  Primarily I attribute this lower cost to shopping more grocery store sales and taking advantage of the deals.

Grocery deals were plentiful in January, and I made off with large hauls of bargain priced eggs, milk and other food staples.

This reiterates one of the main points I write about on this blog — despite having a net worth over $3 million dollars, I remain a very opportunistic person.  When I see a good deal, I’ll exploit it.

Sometimes that means we eat a lot of eggs, avocados, or whatever else happens to be on sale that week.  Oh well!  Avoiding packaged food and employing a little menu creativity goes a long ways toward making this opportunistic eating enjoyable.

Meals in January were filled with delicious family favorites.

I’m also big on creating as little waste as possible in the kitchen.  Wherever I can, I try to use up ingredients before they spoil.  In some cases this leads to very unusual menu choices.

For example, in January I made this Amish dish called Wash day dinner to use up a leftover summer sausage.

Fuel costs amounted to $64 in the month of January.  This is lower than our typical monthly fuel expenditure, which averages around $100.  I attribute the lower fuel cost mainly due to seasonality — The weather is cold, wet, and nasty in the Pacific Northwest during winter, so we travel a lot less.

Mortgage and Childcare expenses were the usual amounts for the month at $4,450.  These are our two largest monthly expenses, but we consider them entirely optional.

Why?  We could eliminate both expenses at any time — We could take the kids out of daycare and keep them home with me (I wouldn’t have time to blog), and our mortgage could be paid-off at any time with unused cash.

Thus, we are choosing these large expenditures on purpose because of the advantages they provide — The kids are becoming fluent in a second language at their daycare (which should provide benefits later in life).  For the mortgage, I’m betting I can find investment returns greater than the interest on our home loan.

So far, both optional expenses are working out as planned.

Utilities & Internet expenses were fairly typical in January, at $495 and $49 respectively.

If you follow this blog regularly, you’ll notice that our utility bills tend to be lumpy — this is due to bi-monthly billing cycles from the local utility companies.

I suspect these larger and less frequent bills are more cost effective than a monthly billing cycle for the utility company.  They end-up making our monthly cash outflows look a bit lumpy however.

The other category amounted to $42 in January.  This amount included the purchase of some hand moisturizer for Mrs. Tako, a take-and-bake pizza dinner (I was feeling lazy), and a returned/repurchased item to Amazon.

The returned item to Amazon was a defective tv antenna preamplifier.  This was a Christmas gift for Grandma and Grandpa Tako, who are in the process of “cord-cutting” their satellite tv service.

Unfortunately, the device failed after just a couple days in use.

Frustrated by the poor quality, I returned the defective preamp and purchased a cheaper model instead. It has since proved to be much more reliable.  Cheaper and better quality!  Win!

This return/repurchase transaction resulted in a credit of $15 from Amazon on money spent in December.

Since this is January, I’m starting a fresh new table for cumulative expenses.  With only one month in the books for 2018, there’s no surprises here. 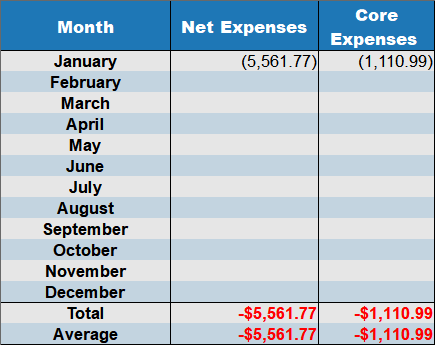 Dividends in January amounted to $2,020.  This is significantly lower than the amounts I reported last year in the month of January.  Mainly, I attribute our lower dividend income to preferred share redemptions that occurred near the end of 2017.

As I discussed in my Growing Dividends in 2018 post, our goal is to match last year’s level of dividend income ($53,000).  We’ll need to put a significant amount of money to work in 2018 to overcome the effect of those preferred share redemptions.

As you might expect, I started a fresh new table for our 2018 dividends: 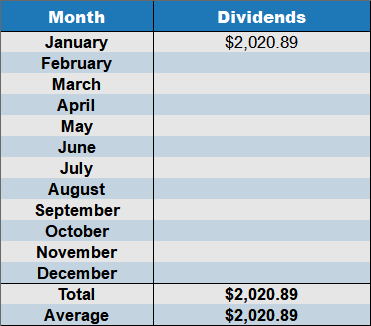 January isn’t typically a large dividend income month for our portfolio.  We tend to see the biggest distributions happen in March, June, September, and December.

If your curious about the month-to-month fluxuations of our dividend income, I recommend looking at last December’s chart.

I admit it — I was a lazy investor in January.  I changed absolutely nothing in our portfolio and let our investments ride.

I just couldn’t force myself to buy stocks at these elevated prices, so I wrote about investing instead — Topics like following insider trades, going completely to cash, and building a dividend snowball were quite popular.

Investing is one of the few activities in the world where sloth can actually be an advantage.  Moving funds around means fees get generated, and capital gains get taxed.  Doing nothing can certainly have advantages.

Well, I did NOTHING in January and saw a 10% gain in our portfolio value.  The markets were very optimistic and stocks rose accordingly in January.  This didn’t make buying new shares easy.

Thankfully, most of these gains disappeared in the single largest one day drop in history of the Dow.

Just like a sale on eggs at the grocery store, I’m going to be on the lookout for good sales on stocks.  After all, what true investors want is lower prices, not higher prices.

Be on the lookout for bargains! 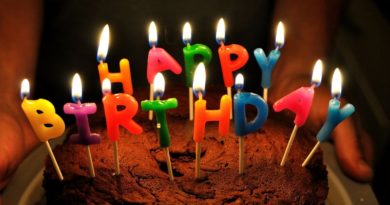 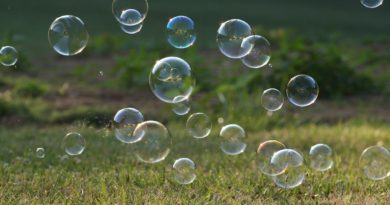 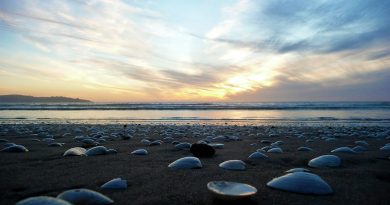 Happy As A Clam