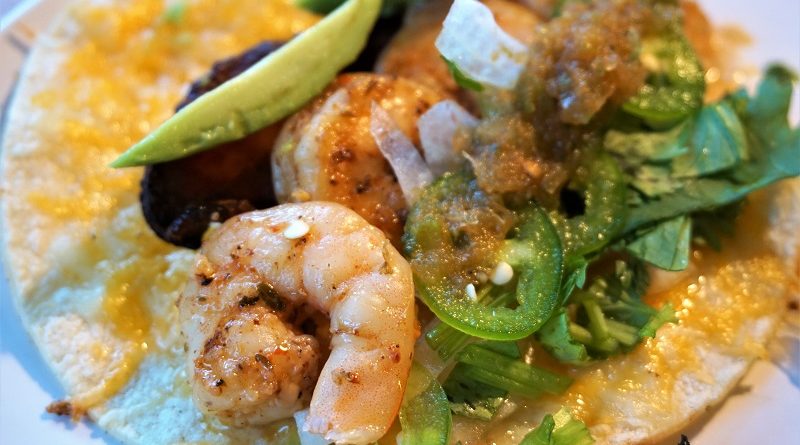 A couple weeks ago I posted a picture of my favorite homemade tacos.  It was part of a post called A Financially Independent Life Is A Good Life.  In the comments, I briefly mentioned that if there was enough demand I would post the recipe.

Well, the internet ended-up going absolutely wild over this suggestion — Every single one of my readers (all three of you) wrote-in asking me to share my famous bacon-shrimp-avocado tacos.  Sheesh….OK!

So strap yourselves in folks — Today, by popular demand I’ll post this recipe along with some of my favorite taco-making techniques.

The thing about tacos is, everybody’s had one before.  They’re enormously popular “cheap eats” that have expanded well beyond the humble origins of Mexican street food.  Tacos are food that went viral even before the internet.

Part of the appeal of tacos is their affordability.  I can wander over to my nearest food truck and pick-up a taco for about $1.  That’s super cheap!  But cheap isn’t everything — those $1 food tacos are only marginally better than something you’d find at Taco Bell.  (Sorry Mr. 1500 — Taco Bell isn’t proper food)

So what’s the difference between ‘just a taco’ and a really delicious mind-alteringly good taco?

About a thousand little things.  The most important of which is that you’re willing to go that extra mile for something that tastes WAY better.

This recipe I like to call “Mr. Tako’s Bacon-Shrimp-Avocado Tacos”.  (Yes, I know I should be charging money for my incredible naming abilities.)

The recipe is a holy trinity of flavors combined that elevate a humble taco into something truly wonderful.

To make this recipe, we must master the four main pillars of taco awesomeness: Meat, Tortillas, Toppings, and Salsa.

All great tacos begin with some kind of spiced meat.  For my recipe I use one pound of Hickory Smoked bacon, and one pound of raw 31-40 shrimp (tail-on).  This will make enough for four adults. 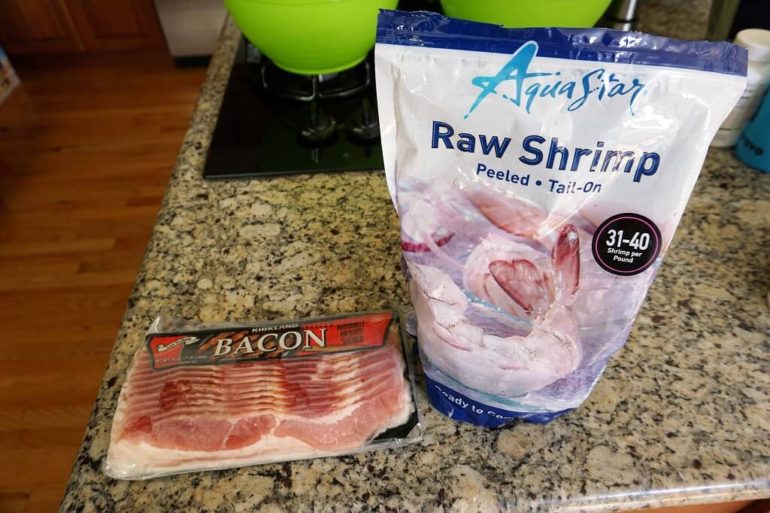 The bacon is already flavored, but our shrimp need a little extra assistance to reach flavor town. We marinate them first. 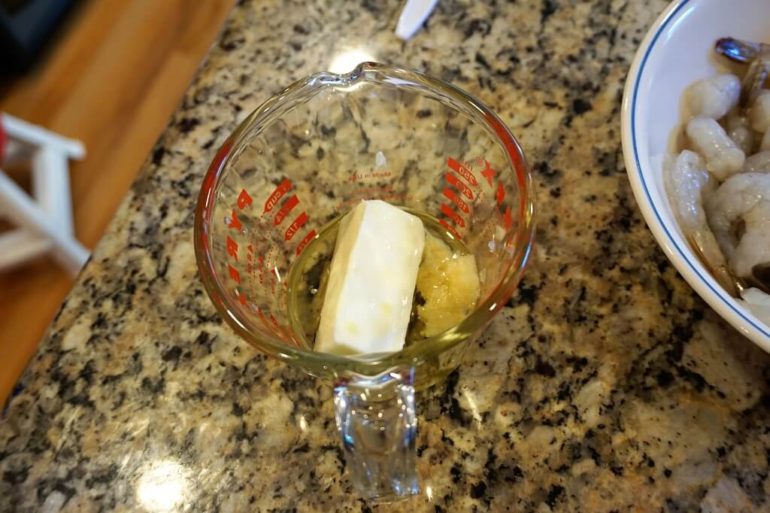 The butter marinade is then melted in the microwave for about 45 seconds until all the butter solids have liquified.  Mix thoroughly.  It should look something like this: 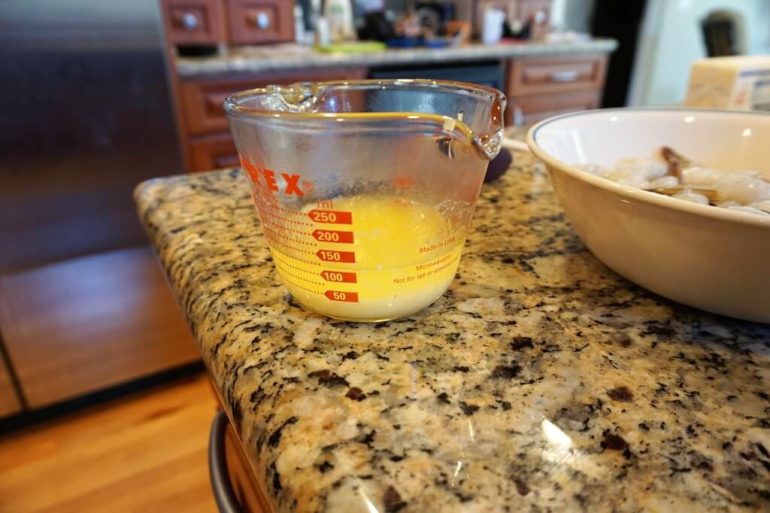 Next, the shrimp will need to be coated with spices.  I like to use Kirkland Sweet Mesquite Seasoning for this dish.

If you don’t have a Costco near you, Amazon has several alternative mesquite seasonings.  Or, you can just recreate the seasoning using the following ingredients: salt, black pepper, chili pepper, red pepper, oregano and smoked mesquite.

Coat the shrimp thoroughly with mesquite seasoning, and pour on the butter-garlic marinade.  Yum! 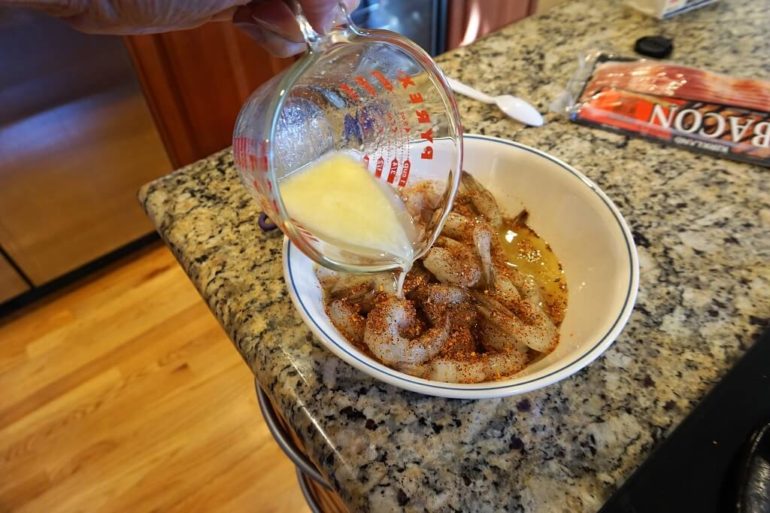 Mix the spices, shrimp, and marinade together.  This should look (and smell) pretty fantastic at this point.  Marinate as long as you’d like.  A minimum of one hour is best. 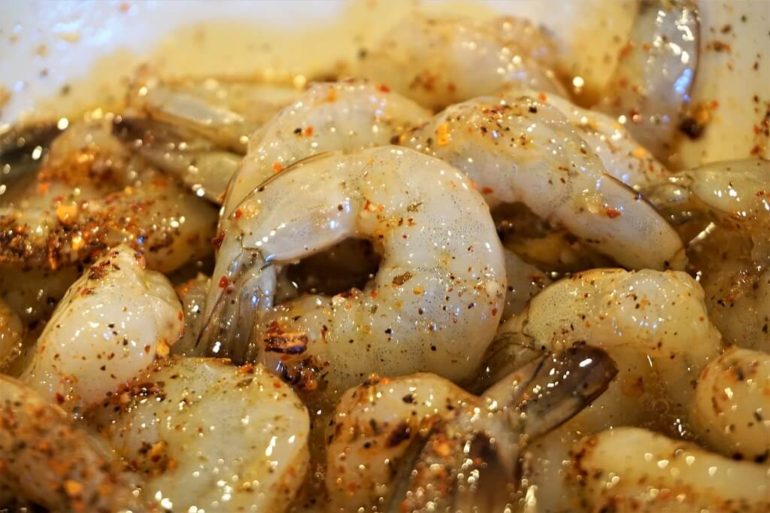 While that’s marinating, work on prepping the other ingredients.  I usually light the grill at this point and start grilling the bacon.  Yes, we grill the bacon!

When grilling bacon, low temperatures are your friend.  Low and slow is how you get grilled bacon to turn out fantastic on the grill.  Meanwhile, all that fantastic bacon grease is going to drip onto the grill and make the shrimp taste amazing later.  Don’t clean it!  Our shrimp are going to soak up that bacony goodness. 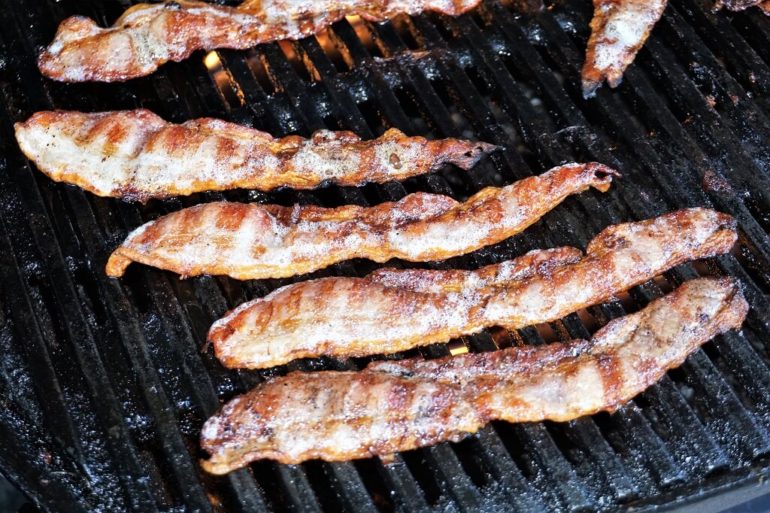 After getting a nice crisp on the bacon, pull it off the grill.  I usually slice the bacon in half — it’s a good ‘taco’ size. 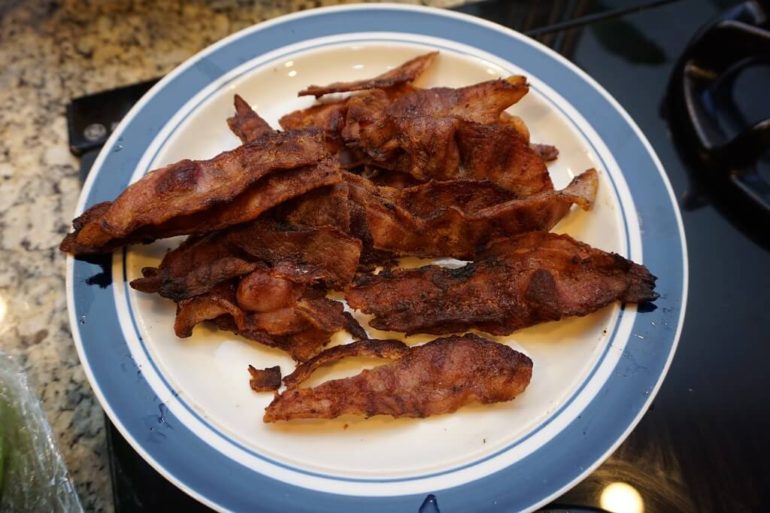 Once the shrimp have marinated we can then  carefully place them on the grill.  If you have wide gaps in your grill surface, take care that the shrimp don’t fall through. 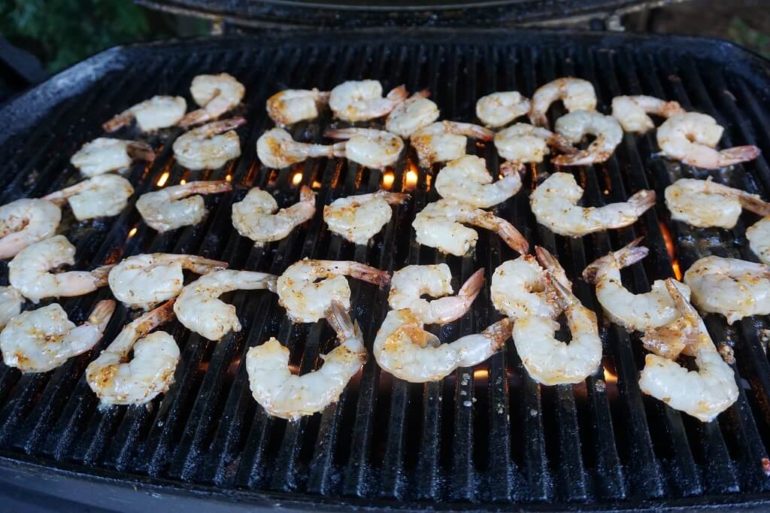 The shrimp will cook incredibly fast on the grill.  Do not leave them unattended.  Two minutes per side is usually sufficient.  Again, low temperatures and slow cooking are how I get good results on the grill.

When they’re ready, the shrimp will develop a kind of ‘crust’ from cooking on the grill.  That’s a good time to flip the shrimp. 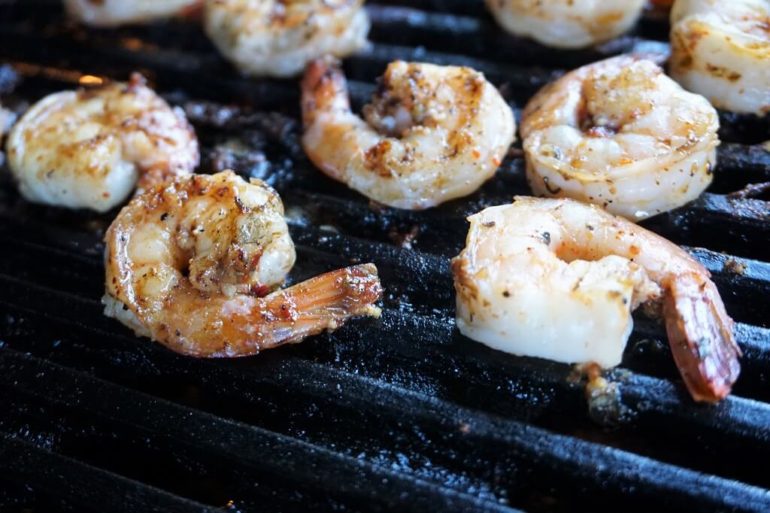 Meanwhile if there’s any of the marinade left, cook the remaining sauce in the microwave.  A couple minutes works in my microwave.

After the shrimp have cooked on both sides, remove them from the grill.  Place the shrimp in the remaining sauce, and stir until everything is evenly coated.  It should look delicious… try to stop yourself from eating one. 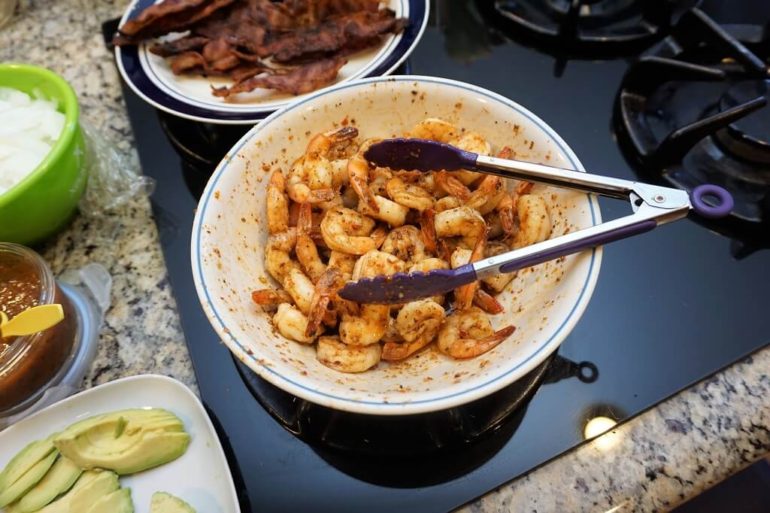 Next-up are the tortillas.  I would love to have the time to hand-make tortillas, but with two little kids running around the house… there’s not a chance in hell it’s happening!  I buy pre-made corn tortillas.

If your tortilla is made from wheat, that’s actually bread.

The problem is, pre-made corn tortillas don’t taste very good.  Don’t believe me?  Go try one… pop it in your mouth and give it a chew.

Not very good is it?  The taste and texture of a tortilla isn’t fantastic by itself.  Once again we must elevate a humble ingredient into a taste sensation with a little extra work.

Again, the grill comes to our rescue — we toast the tortillas on the grill.  This will improve both the texture and the taste. 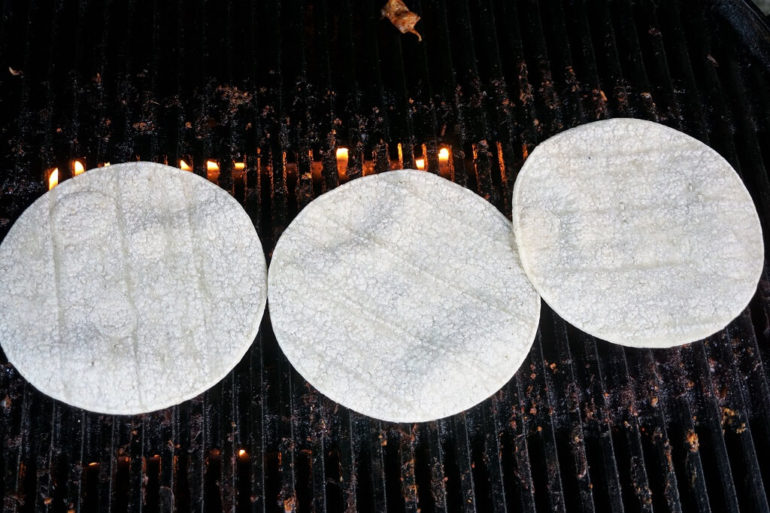 While we’re at it, I usually put down some cheese on the tortillas.  There’s not a flavor problem cheese can’t fix. 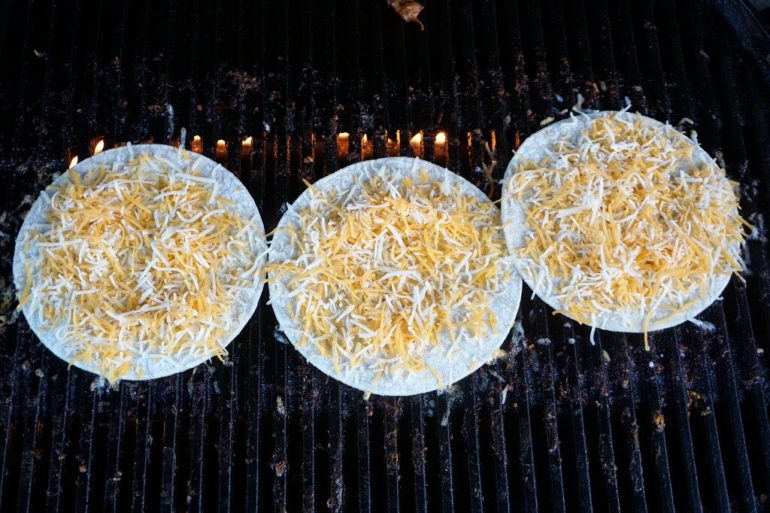 Tortillas are all about texture.  The idea here is to gently toast the tortillas, not to burn them.  When you bite into a correctly toasted tortilla it should still be flexible, but have a very slight ‘crunch’.  Texture is everything when it comes to mastering tortillas.

When they’re done, the cheese looks all melted and bubbly.  The edges of the tortilla will have just started to brown… that’s when you know you’ve hit flavor town. 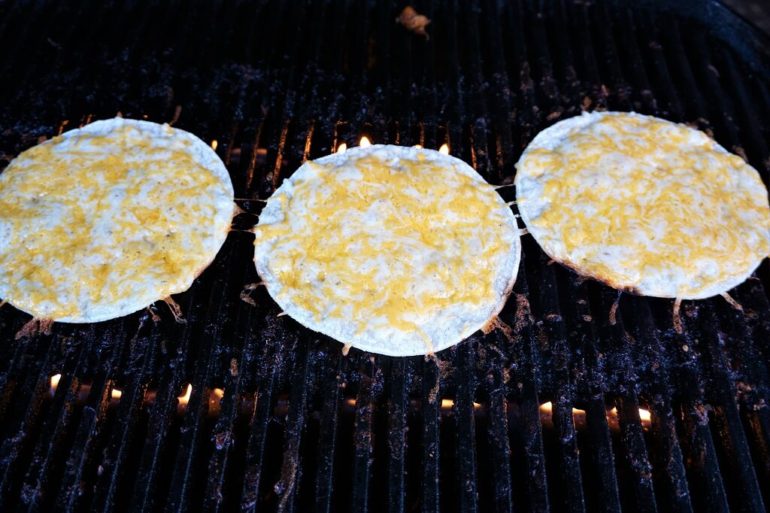 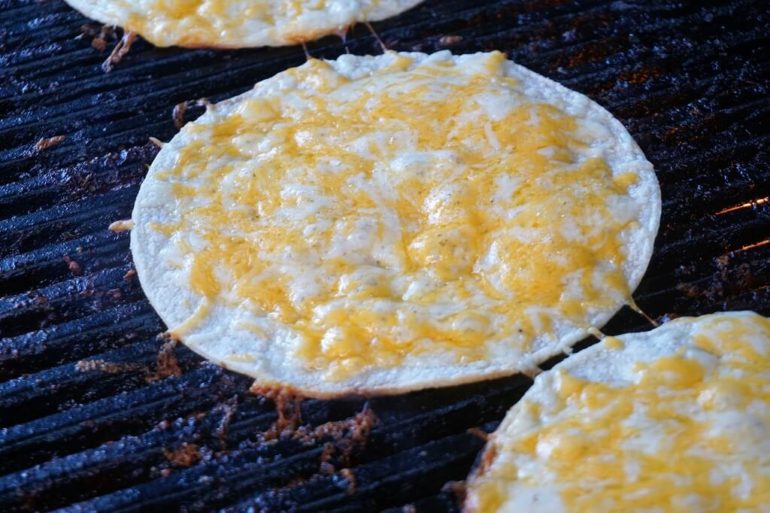 How people ‘top’ their tacos is a very personal affair.  For me at least, fresh is always best when it comes to toppings.  I love having fresh toppings available — fresh onions, fresh cilantro, fresh jalapenos, etc.

I usually chop the toppings for my tacos before I cook anything on the grill.

Since these are “bacon-shrimp-avocado” tacos, we need a really nice avocado.  It’s worth paying a little extra for a nice avocado — it’s one of the main flavors for the dish.

Onions go really well on tacos, but can often be too ‘hot’ for most people.  If you can, find a sweet white onion.   Sweet onions tend to have less of that sulfurous ‘hot’ flavor.  I chop mine into thin 1″-1.5″ pieces. 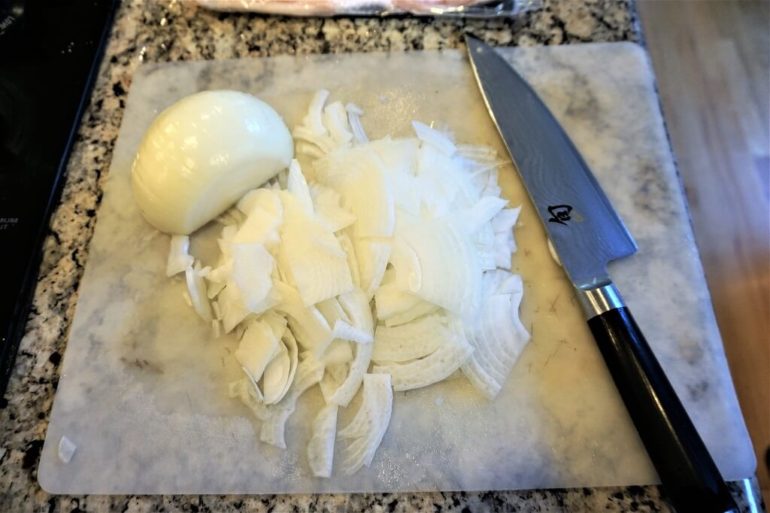 If you can’t find a sweet onion, try soaking a ‘spicy’ onion in water after chopping.  Drain the water after 20 minutes and you’ll find the onion loses a lot of its ‘heat’.

Ultimately, what toppings people like on their tacos is a very personal thing.  I don’t try to pretend I understand what everyone wants, so I set-out a topping buffet like in the photo below.  This way, everyone can choose their favorites.

When it comes to Salsa, I’m admit I’m very opinionated, but for good reason — If spiced-meats are the heart of a good taco, then salsa is the soul of a good taco.

Salsa is extremely important to making a delicious taco, but unfortunately the stuff you find in the grocery store is almost universally garbage.

The solution?  Make your own.  If you haven’t already, take a look at my roasted salsa recipe.  Not only is it cheaper, but making your own salsa really does make tacos taste better. 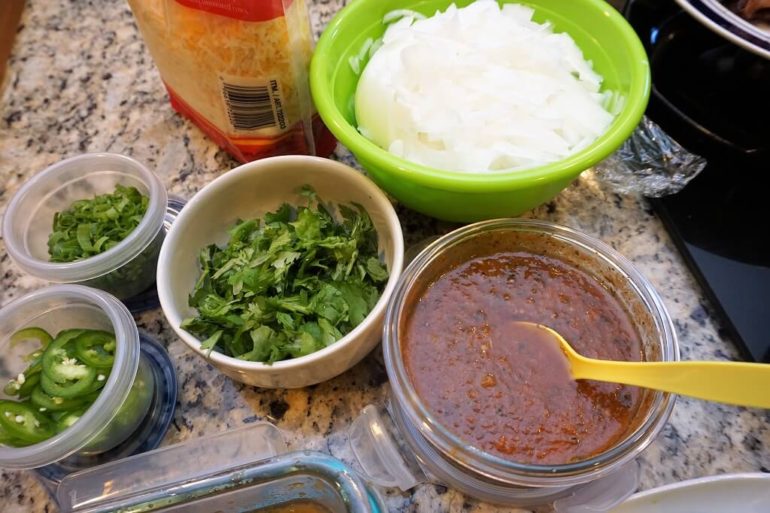 We cover a lot of different ground on this blog, and despite it mainly being about personal finance, I’m not afraid of posting my favorite recipes.  I mean, just look at this taco — how could you not want to make this and eat it?

For me, financial independence is about living the good life.  Really good food is a big part of living that good life.  Unfortunately too many people now leave the making of food to so-called “experts”.  It’s a damn shame.

Restaurants and eateries, and even the food supply-chain care mostly about making profits, not making food as delicious as possible.  Who else is going to slow cook the bacon, and toast a tortilla to just the right texture?

Only home-cooked food can attain this level of awesomeness — which is exactly why I recommend that people on the Road To FI stop eating-out entirely.

You’ll eat far better, and become far wealthier as a result of the incredible savings.  Given time, your culinary skills will improve and taste buds will sing arias about the incredible flavors you produce.

Now, who wants to eat some tacos? 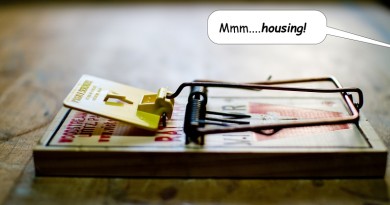 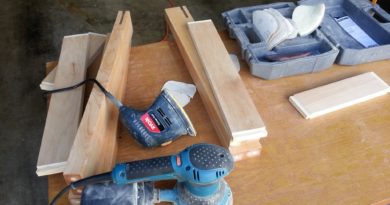 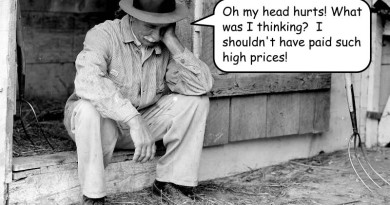 31 thoughts on “Making A Better Taco”