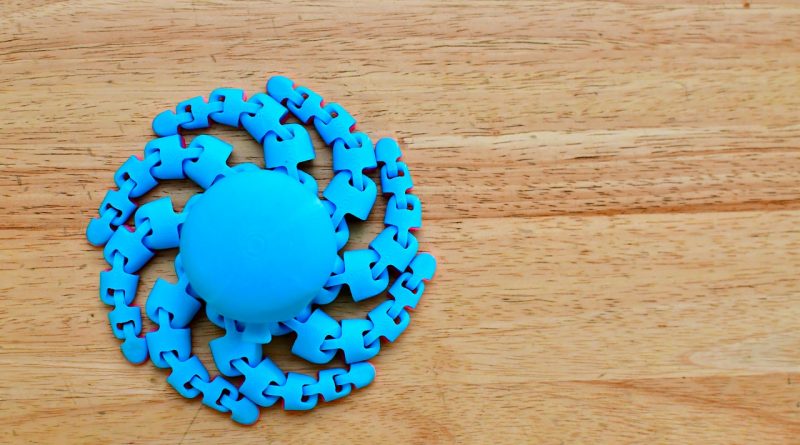 Don’t look now, but it’s time for another monthly update!  Just like in previous months, I like to use this post to share all the niggly financial details of our life, as well as how much dividend income we’ve earned.

March was a fantastic month for a number of reasons.  For one, March is when daylight savings time begins, and I finally feel like we aren’t living in the dark all the time.  Having natural light does so much for my mental state of mind, it’s absolutely amazing!

I go from “having dark thoughts” to “wanting to take on the world!!!”, all with just a 1-hour time shift.

Second, March is the first month of the year when our stock dividends really start rolling in.  Let me tell you, it’s very reassuring to see that firehose of cash start blasting money into our accounts…

Dividends amounted to $14,401 in March!  That’s a dividend number I once would have never dreamed possible, yet here I am writing about it, matter of fact.  That kind of dividend income really is possible given enough savings and time.  It’s amazing what a little compounding can do over time! 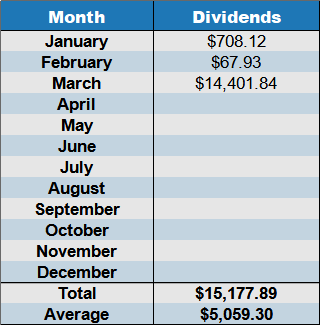 Year over year, March dividends grew by 14.9%.  This increase in dividends can be attributed almost 100% to the cash we invested in the March lows of 2020.  It was a good time to invest, so we did, and this is now boosting our dividend income one year later.

Not every month is this fantastic of course.  Most dividend payments only happen quarterly.  This means 8 out of 12 months of the year are going to be ‘dry’ months for dividend income (like February was).  It’s mostly ‘crickets’ for those months, and then there’s a mega river of cash when the floodgates finally open-up again (like they did this March).

Since dividend schedules can vary significantly from company to company we still end-up seeing a few payments in months like February or January, but the bulk of our dividend payments always arrive in March, June, September, and December.

For the year so far, we’ve collected $15,177 in dividend income, which is a very similar pace to what we saw last year.  If the economy continues to improve, I expect no dividend cuts this year.  We might even a few dividend raises… if all goes well.

Expenses in March totaled $3,780.  This number is a bit higher than we normally see, mainly due to some stocking-up of groceries, and utility bills that happened in March. 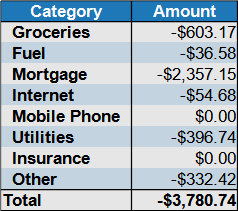 Groceries for the month totaled $603.  This amount was much higher than we usually see in a given month (we average around $500/month).  I attribute this increase to some stocking up we did after a very inexpensive February.

That said, we ate exactly as we usually do — with plenty of delicious food!  There was no shortage of mouth watering edibles in March, that’s for certain! 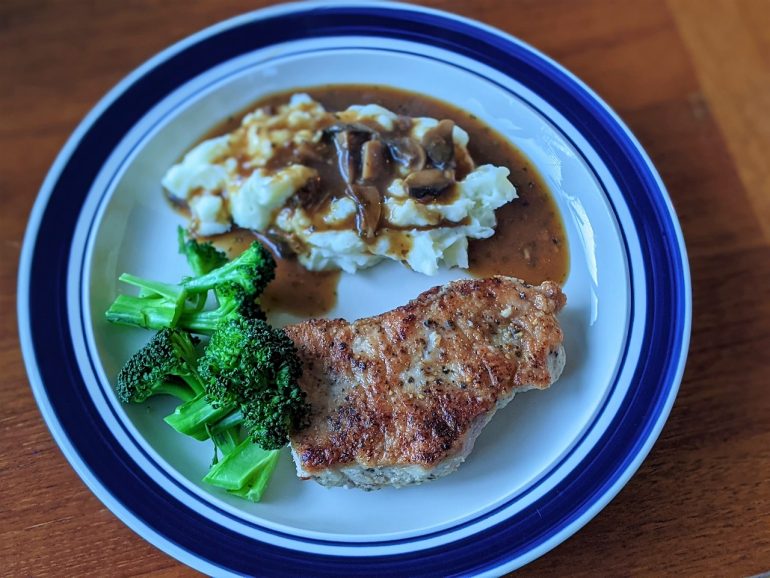 Yum!  Of course, I don’t just stick to Western cuisine.  Lately I’ve been trying to practice and improve my Thai recipes.  Here’s one evening’s chicken holy-basil with fried egg: 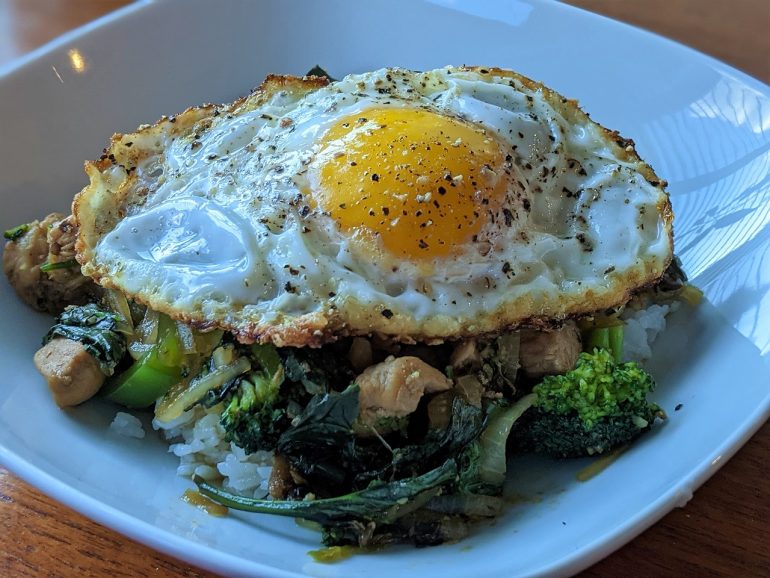 We also tend to do a lot of  “Japanese home cooking”.  Here’s one such meal — Teriyaki chicken, izakaya cucumbers, natto and rice, and tonjiru soup.  It was a delicious meal! 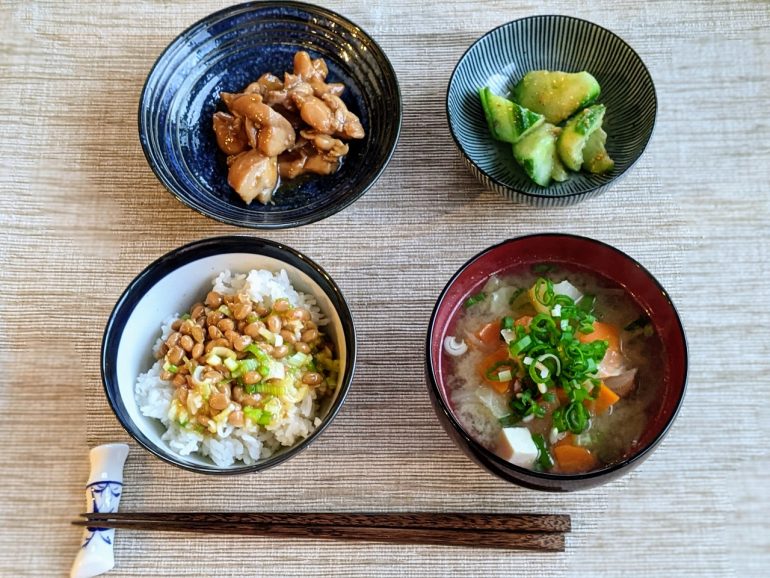 Clearly we must be starving ourselves on a regular basis to save money, so I like to include pictures of some of the more “simple” meals… such as this low-cost meal of ginger pork and miso soup: 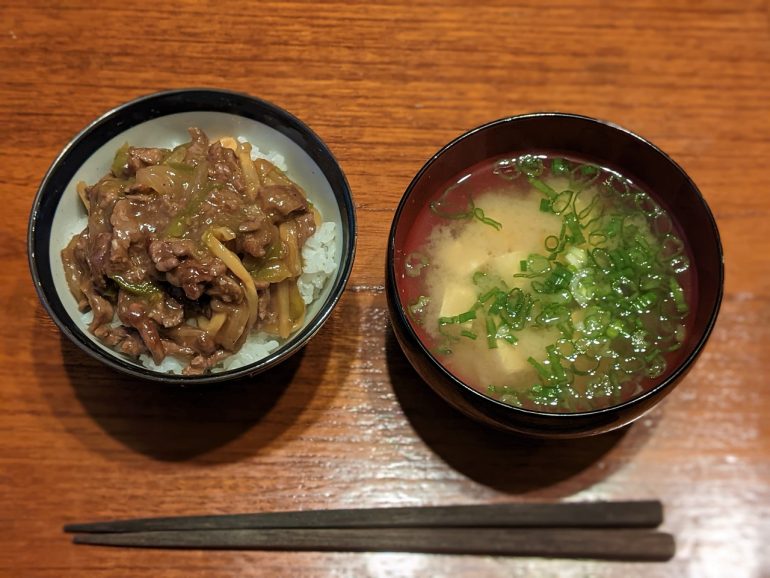 Like most families we have leftover nights and “clean out the fridge” nights too.  I made this broccoli soup to clean up some leftover broccoli and potatoes.  It was very basic, but delicious. 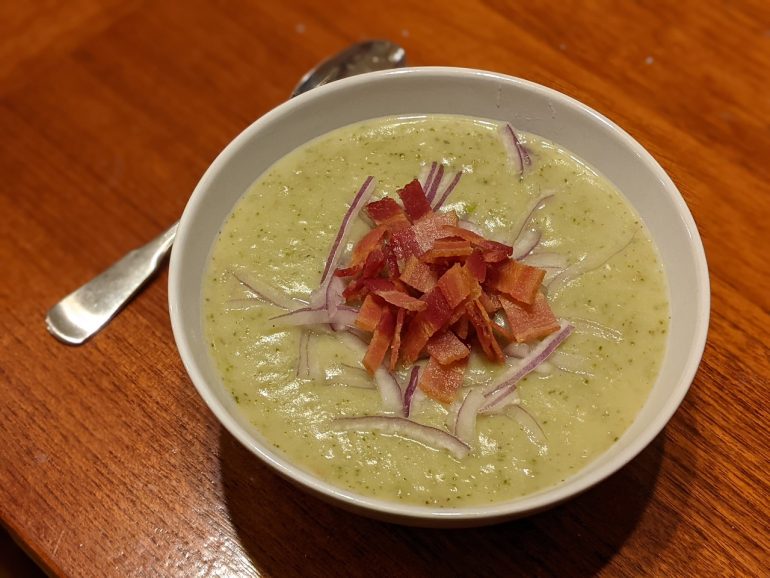 Then, of course, there are the nights when we splurge a little on more expensive items.  In March we had a “DIY sushi” night with lots of delicious sushi fixins… 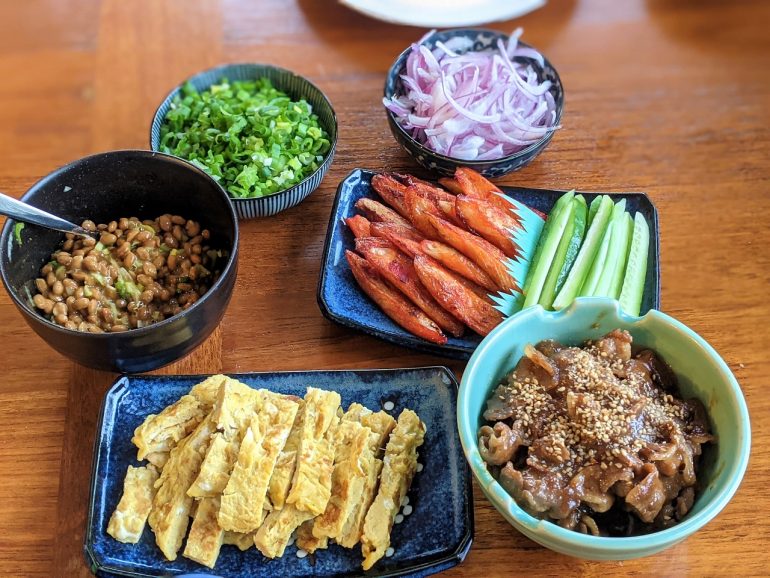 Fuel spending was (again) abnormally low at $36.  Pre-COVID we were spending around $100-$140 per month on fuel, but this changed dramatically over the last year.  We now spend less than $100/month on fuel.

In this case it was my car that needed filling in March.  I think we’ve been averaging around one or two tanks of gas under these COVID-19 “stay at home” conditions.  It’ll be interesting to see if fuel spend increases more permanently in the future as we come out of this thing.  There’s already a TON more traffic on the road compared to 1-year ago, and I only expect it to increase as more vaccinations happen.

As usual, our largest single monthly expense is our home mortgage.  This amounted to $2,357 in March.  This includes interest, principal, insurance, and taxes.  If this seems like a lot of money, please remember that we live in a high-cost of living area, and real estate is quite expensive here.

Internet expenses were slightly higher for the month at $54.  Instead of our regular monthly payment, the March bill was slightly higher as we transitioned off the old contract and onto to a new contract.  Nothing really changed on our end, we still have 100Mbps cable internet provided by Comcast (XFinity) with 5Mbps upload speeds.  Our normal internet bill of $45 will resume next month once Comcast’s billing department gets caught up with the change.

Mobile phone spending in February came to $0.  Yes, $0 dollars!  This might come as a complete shock to people who are used to spending $60 (or more) for phone service every month, but it is possible to spend $0.

Why is it zero?

Typically we pre-pay our mobile phone service once a year.  This happened back in May of last year, and amounted to $35 for two phones.  Yes, that is our annual amount. (Note: We are grandfathered into this plan.  T-Mobile no longer offers it to new subscribers.)

Google Voice handles the remainder of our telephony needs for free.  Why bother paying more than necessary?

Utility bills in March were $396.  This included our electricity/gas bill ($146), and a bi-monthly water bill of $250.  Both amounts seemed perfectly “normal” for this time of year.

Now that temperatures are beginning to rise with spring here, I expect to see our electricity/gas bill slowly decline over the next few months and bottom out in summer.

Insurance costs in March amounted to $0.  This is a normal amount for us.  Most of our insurance expenses actually occur once a year in October, when we pay our annual car insurance bill.

As usual, we prefer to pay very large once-a-year insurance premiums due to the slightly lower cost (given by our insurance company) by doing it this way.

Other spending was $332 for the month.  This “Other” expense category is a ‘catch-all’ for all the expenses that don’t fit anywhere else in the monthly report.

In March, we had only a few “Other” items:

Is this inflation staring us in the face?

That’s a possibility, but I think it’s too soon to tell.  The prospect of inflation can be scary, but I watch our numbers pretty close.  Food prices might be up slightly, but we also did some stocking-up in March that may have bumped up our monthly spending more than usual.

We also have plenty of room in our budget to buffer against inflation — I expect to see dividends of $62,000 for the year, so as long as our monthly average spending is less than $5167/month we should still manage to underspend our dividend income for the year.

Of course, any passive income that doesn’t get spent on household expenses, I will eventually reinvest and keep compounding further. 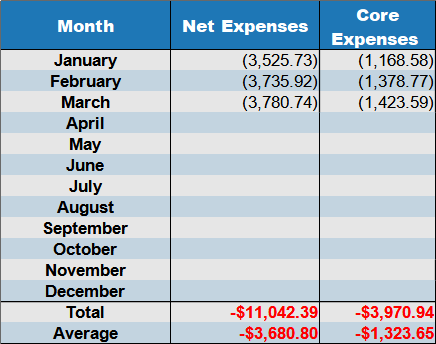 March was relatively uninteresting on the investing front — I neither bought nor sold investments in March.  I was content to hold our existing assets and watch them rise along with the rest of the market (the S&P 500 rose 4.2% in March).

While the economy continues to improve (slowly), I’m not very interested in paying 41 times earnings for the S&P.  That just seems… a bit too optimistic for my blood.

During the pandemic, S&P 500 earnings declined by about 30%.  Assuming the economy recovers those lost earnings again, that means a S&P PE of about 30 under a “full recovery” scenario.  Given our current interest rate environment, I think that’s historically a very high price to pay for stocks.

Maybe I’m wrong of course, but investors should at least do some careful contemplation before buying stocks.

Meanwhile, I’m doing some careful contemplation of my own about my terrible airline investment.  I still haven’t made any “buy, hold, or sell’ decisions on it yet.  I’m still weighing all the ‘pros’ and ‘cons’, as it were.  The economy still has room to recover, so it’s possible this holding may go from being “one of my worst investments” to a “not so terrible” investment.

That’s it for March, and thanks for reading! 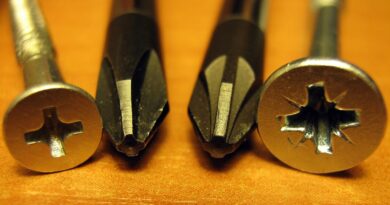 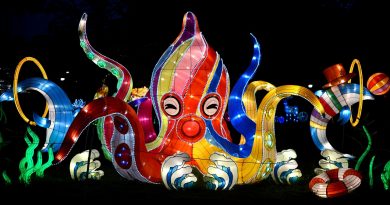 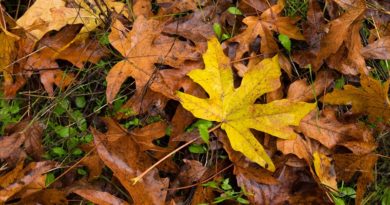