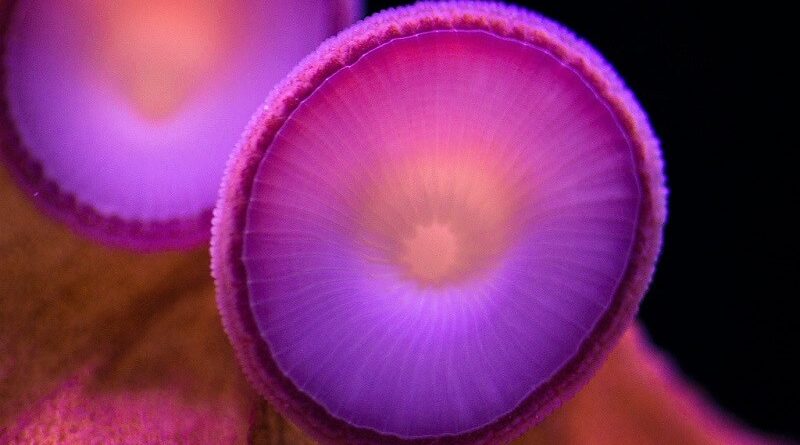 Ahh May!  May turned out to be a very fine month here in the Pacific Northwest.  The clouds finally started clearing!  Near the end of the month we saw blue skies and temperatures that even exceeded 75F (24C)!  Usually wonderful weather like this is strictly reserved for the summer months.

Subsequently, we spend most of our free time working out in the garden during the month of May.  May also saw a visit to the zoo and a family road trip to southern Washington.  It was some great family fun.

Our expenses amounted to $5702.97 for the month of May.  By category, the expenses broke down like this: 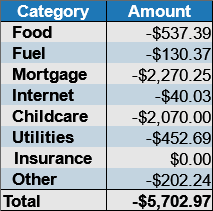 Food expenses were ever-so-slightly higher in May at $537.39.  Usually we spend around $500 per month.  I guess this slightly more expensive month makes-up for our cheaper than expected April.  We didn’t eat out in May, but we still had some very nice meals.

Fuel costs were slightly higher in May due to our family road, at $130.37.  Without the road trip, fuel expenses were probably close to our long term average of $100/month.

Mortgage and Childcare expenses are always the big expenses for the month, consuming $4,340.25 of our expenses.  We consider these costs entirely optional because we could eliminate them at any time — I could have the kids home with me 100% of the time (I’d probably have no time to blog), and we could pay off the mortgage at any time.

Outside those two major expenses, our core expenses were $1,362.72, which is typical for our family of 4.

Internet expenses (which were supposed to rise this year) are still being discounted because of Comcast’s mistake.  For the month, internet costs were only $40.03 for 100Mbit service.  In June, this will jump to $49.99, and remain there for the next 12 months.

Utilities were slightly higher because of two power bills in the month of May.  It seems strange to get two bills in one month, but that’s just how the billing cycles landed.  Our last power bill was $102.17.  With summer fast approaching power bills typically fall under $100/month.  Most people don’t have air conditioning out here in Western Washington, so summer utility bills are usually very cheap.

Our highest utility bill is the water bill at $229.20.  We do a lot of laundry with two boys, but the actual cost of the water is only $45.  The rest is taxes, fees, minimum charges, and a water meter charge.  That’s big city living for you.

The Other category contained some interesting expenses for May — We signed-up for another new credit card for our travel hacking experiment.

The $75 annual card fee is paid up-front, but in-return we receive 30,000 miles.  This is the second mileage card we’ve signed-up for in the last couple months, so we’re already $150 in.

Hopefully this experiment works out.  We plan on spending the points on a “awesome-yet-low-cost” vacation to Japan.  A single ticket to Japan typically costs around $800 to $1000, so we should be able to save some money by travel hacking a free ticket.

Both Mrs. Tako and I also had to pay our annual cellphone bill of $12 each (actually $10, but taxes were an additional $2).  I’ll never understand why people put up with ridiculously large mobile phone bills.  We’re on a bare bones prepaid plan, and simply use Wifi and Google Voice for most of our telecom needs.

Look at it this way — 98% of your life you’re absolutely bathed in free Wifi.  Is the other 2% really worth thousands of your dollars per year?

We’re now 6 months into the year 2017, and we’ve spent about $27,659.  Most of that goes to paying for our mortgage and daycare expenses for the kids. 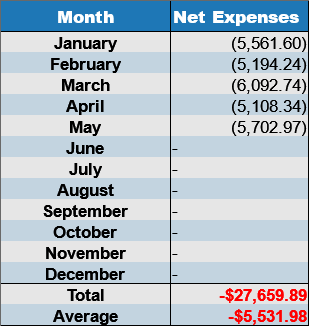 This pace is roughly six thousand dollars higher than last year at this time.  We’re now sending Tako Jr #2 to the same language immersive daycare as his brother (three day a week), which is the bulk of the added expense.  Last year at this time, he was still at home full-time with me.

It’s a personal choice to spend those extra dollars, but we think it’s worth it to have kids fluent in multiple languages.

Dividends in May were a meager $554.64.  This was expected, as May is one of those “unexciting” dividend months.  The bulk of our dividends get paid out in March, June, September and December.  Those 4 months comprise roughly $32k of our annual dividend income.

Dividends for the year have averaged $3,323.70 per month, which is considerably higher than our core expenses. 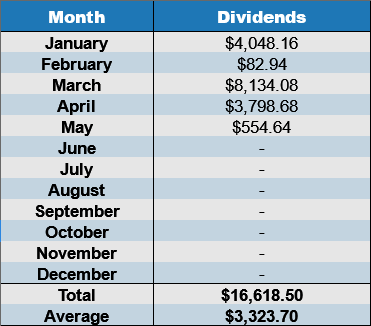 If we meet our Dividend Growth Plan, annual dividends should reach $53k for the year.

I’m not excited about investing all our extra cash when the stock market is at these “all-time high” levels, so we might not reach our dividend goals for the year.  We’ll see how it goes.

I truly believe the dividend tail should not wag the investing dog.

Our long-term plan is to eventually sell our current home in this expensive city, and move to a lower cost city where annual expenses are lower.  We’re in the process of looking for that new home — and have several exploratory road trips planned for this summer.

Now it’s time for the sleep report — the part of my monthly update I really dread.   As I wrote about back in March, I’m an absolutely terrible sleeper.  I average somewhere around 4-6 hours of sleep per day.  It’s probably not very good for my health.

This is better than I did in March or April.  I consider it a reasonable improvement.

Having the kids sleeping through the night was a big help.  Notice that I said ‘was’.  In May we decided moved both boys into the same bedroom, and this caused a few issues.  Both boys are now waking-up more frequently in the middle of the night (or early in the morning), and that means I’m sleeping less.

Investment Changes In May

Instead of investing capital in May, I actually went the opposite direction.  I sold shares.

I know, I know…I’m supposed to be investing our excess cash, not creating more of it!

After considerable thought and analysis, I decided to call it quits on our AEO shares.  While I do think the company is very well managed, the tide against traditional retail has definitely turned.  For a more detailed analysis on why I sold those shares, please check out the post Is Retail Dead?

Turns out, this was a smart decision.  Just a few days after I sold, the stock dropped nearly 30% when the company reported they would accelerate store closures… exactly what I expected to happen.

Big consumer brands are definitely in trouble — It’s now easier than ever for small companies to get products to market, and sell directly to consumers via the internet.  They can quickly build a brand that’s based upon true product quality, not marketing strength and store penetration.

This has me wary of investing in any major consumer brands.  Many of the supposedly ‘strong moat’ brands are actually eroding pretty quickly.

While I do like investing in low-cost index funds, at these levels it feels like quite a stretch (even with low interest rates).  If the S&P 500 was at levels 50% lower, I’d simply throw most of our excess cash into index funds, and call it good…

It has me cautious and thinking I need to be very selective with my investments.

Anyone who plans to live off investments using the 4% rule should be very careful investing new capital at these levels.  I’m even more conservative, and prefer the 3% rule.  Where possible, we try to live off dividends instead of capital appreciation.

That’s it for this month!  Stay tuned for more eight-tentacled fun. 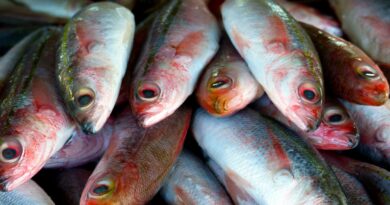 Alternative Stocks Poised To Succeed In A COVID-19 World 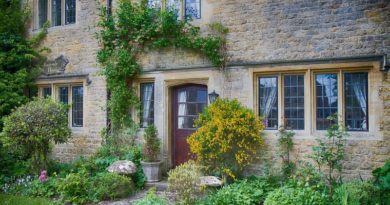 28 thoughts on “May 2017 Dividend Income And Expenses”