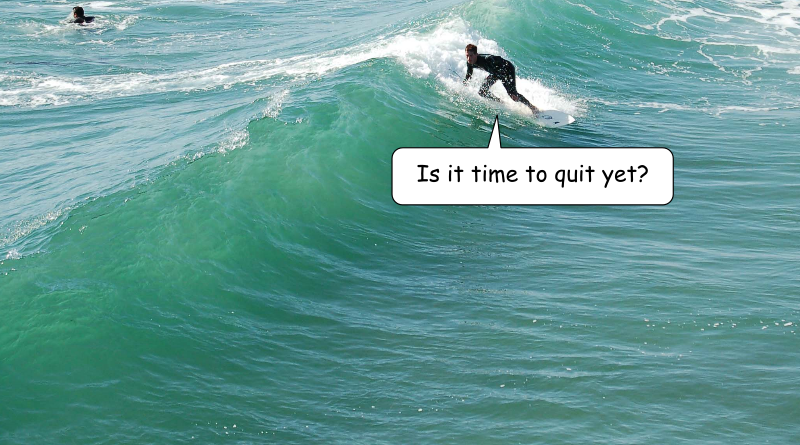 So you’re finally getting close to financial independence.  You’ve worked hard, you’ve saved, and you’ve invested as much as possible.  Instead of worrying about debt, you now worry about return on investment.

Perhaps your net-worth has broken one million dollars.  You’re starting to feel pretty wealthy, and thoughts of saying sayonara to that 50 hour a week job might be on your mind…

But hold on a moment — You might want to think this through carefully.  There are optimal times and sub-optimal times to exit employment.

The Boom And The Bust

We all know markets boom, and bust.  It’s the natural order of normal working markets.  Like the ocean, the waves come in, and the waves go out…

If you’re like most people, the vast majority of your wealth is going to be tied up in a 401k plan (or other workplace saving plan).  Its value fluctuates daily depending on stock market movements.  This means your net worth is highly correlated to the stock market.

Most people get that itch to retire early when markets are at their peak (like right now).  The stock market has been booming and equity prices are at or near all time highs.  People feel wealthy right now, and consumer spending is good.

Why?  When the next major correction arrives, your net worth is going to take a big haircut.  In any single given year, stock prices can have huge swings between 52 week highs and the 52 week lows.  Swings of around 50% in fact.  You don’t want to be withdrawing capital during a 50% decline.

Think a 50% market drop is unrealistic?  Think again:  The Dow dropped more than 50% from its peak during the last U.S. recession.  From a historical perspective, market drops exceeding 20% are surprisingly common according to some studies.

Before you go tell the boss where he can shove his TPS reports, make certain your portfolio can survive that next big haircut!

So let’s run this little calculation right now, shall we…  Imagine you had a net worth of 1.2 million dollars in your 401k.  Now take that haircut, and mentally lose 50% of your net worth (to simulate a big market correction):

How does that feel?  Not such a large sum anymore, is it?

If we use the 4% rule, that portfolio could generate around $24,000 in income.  Could you quit your job and live off that?

Admittedly, a 50% general stock market drop would be pretty bad, but that’s far from being a worst-case scenario.  The stock market dropped around 90% during the Great Depression, making our recent recession look small by comparison.

Where Are We Now?

At this point (late 2016) we’ve had 7 years of economic expansion, and rising stock market prices.  It’s been a very good run.  But how do we know if we’re at the top of the market, the bottom, or somewhere in the middle?

It’s really hard to say — we can’t predict the future.  The stock market could start dropping tomorrow, or we could still have years of economic expansion (and rising stock prices) ahead of us.  But the odds are against it.

No economic expansion in the United States has continued for more than a decade without a recession.  Statistically speaking, I think it’s safe to say that we’re either somewhere “in the middle” or near “the top”.

So how do we avoid sequence risk when we can’t tell the future?  I’ve collected a few strategies that might help solve this little conundrum…

Strategy #1 — The Margin of Safety

Remember our 50% haircut calculation?  The simple act of doing that 50% calculation already has those mental wheels turning.  Suddenly you might be thinking “will I have enough when it happens?”

So, when to quit?  Frankly, you can quit at any time as long as you have a big enough margin of safety to deal with major market corrections.  After a 20% to 50% haircut, can you maintain your standard of living?

The idea with this strategy isn’t that we can avoid sequence risk, but you might be able to overcome the negative effects with just more savings.  Sequence risk doesn’t matter nearly as much when you have WAY more than you need.

If it looks like you don’t have enough to weather a 50% decline tomorrow, it would be prudent to build-up your margin of safety!  This advice may fall on deaf ears for those caught up in market exuberance.  Don’t say I didn’t warn you.

Strategy #2 — Save And Catch The Wave

That said, the absolute best time to quit a job would be after a recession ended and stock prices were rising again.  If you continue to work and invest your savings all through the decline, those funds would act like a tail wind as the market moved back into expansion….pushing your net worth higher.  With any luck, this would ensure sufficient income to live-off for a long period of time, and avoid sequence risk.

Think of this strategy as “catching a wave”.  Just a like a surfer wants to ride a wave all the way into shore, an investor needs to make the right moves to catch the market contraction and expansion wave — to carry him (or her) as far as possible.  That means avoiding any withdrawals from your portfolio during negative bear markets.  That would slow our momentum way too early.  We need to build up speed and set up a good sequence of returns!

So, diligently invest your savings when the market declines, and avoid any withdrawals.  Then, ride the economic expansion into retirement.

Another strategy I see frequently utilized is to move assets out of the stock market, and into uncorrelated assets.

Whether it’s bonds, real estate, or even private companies, the general idea is to move a big chunk of your assets into other markets that will be significantly less correlated to the stock market. (They are also frequently less liquid, so be careful)

When the stock market starts dropping, these kind of assets will either change price very slowly, or not at all in response to the stock market.  Uncorrelated assets can then sustain the investor while they wait out the recession.

Frequently these assets get criticized for their low returns compared to the stock market.  But in my experience, given enough effort, these kinds of assets can have returns as big as stocks.  It just takes more work.

In fact, some real estate investors go their entire lives without investing in the stock market.  I’ve known a few of them.  It’s very possible to do.  But it does take skill and a lot of work.  It isn’t nearly as easy as investing in index funds.

Strategy #4 — Income, Not Net Worth

Another way to think about how to solve this problem, is to ignore net worth completely.  Stop looking at whatever the market quotes you daily and focus instead on the income your portfolio generates.

When the income from your stocks, bonds, preferred shares, REITs, real estate, and other assets exceeds your expenses, you can go tell-off the boss.  Again, some margin of safety is a good idea, but income generating investments tend to be fairly stable.

Why does this avoid the sequence of returns problem?  When you live off the income only, you don’t need to sell when markets are down….deftly avoiding sequence risk.

If you haven’t already guessed, this is the general strategy the Tako family has taken.  We’re attempting to live off only dividends in 2016.

We’ve built up our investment portfolio over the years to exceed $2 million dollars.  But I don’t even think about that number.  It can change daily, and I mostly ignore it (which is exactly why I don’t post about our net worth more frequently).  Instead, we focus on income, all the while maintaining steady growth.

After your finances pass into the realm of financial independence, you may want to consider an alternative to quitting — Get yourself laid off!!  This is the ideal way to exit a job because of severance packages.

In most cases, if you’ve worked at a company for a significant number of years, they’ll provide a severance package…to..err… smooth the transition.  That severance package can help setup your financial independence (or early retirement) for success!

I had the opportunity to collect such a severance package at my last job, before I decided to be a “stay-at-home” dad.  I exited the job with a layoff, and it netted a decent severance package.

While it wasn’t intentional on my part to get laid off, I had a pretty good idea this was going to happen.

The company I worked for decided to close my local office.  At the time, employees were told that there would be no layoffs, and everyone would work from home.  Great story!  If only it had been true — one-by-one, over the last year every single employee was laid off!

Had I quit my job when I sensed the risk, I would have received absolutely nothing.  But hanging in there for a couple months until it was my turn, proved very beneficial.  I ended up with 4 months of extra living expenses, in cash!

Engineer your layoff when your finances are ready!  This could be as simple as getting yourself put onto a failing product that will eventually be canceled.  Sometimes you can even volunteer to be laid off!

Other times, you’ll need to take a more direct approach — maybe you forget to file those TPS reports, or constantly come into work late.  Office Space (a fantastic movie btw!) provides some excellent examples on how to achieve this feat.

I hope you find this set of strategies useful.  Can you think of any I missed?

Escaping the negative returns isn’t easy when we can’t predict the future.  But having a smart strategy to avoid the problem probably won’t hurt!

When that big wave finally comes crashing down…make sure to be well out of the way. 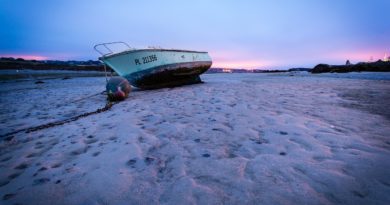 The Seas Of Change 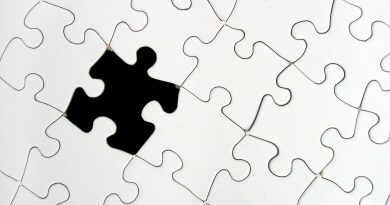 The ROE Conundrum: Where Did The Shareholder Returns Go? 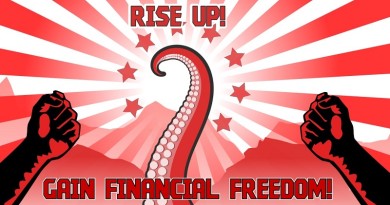 21 thoughts on “When Is The Best Time To Quit Working?”